From the book “Sai Baba – The Embodiment of Love” by Peggy Mason, 1982:
I think I should add here a question I asked at another interview about UFO´s. I mentioned the great increase in both landings and actual contacts with beings from space in what we call flying saucers. I asked if they were trying to help the earth. And to bring the idea of brotherhood, and a wider understanding of other dimensions. Swami replied that this was so, and added, “And they have much work to do .“

However, in contradiction to this affirmation an Italian disciple of Sai Baba tells a story of how Sai Baba once took a group of students to a wildlife forest reserve in India. While they sat in a semi-circle around Sai Baba for a light afternoon snack, one of the student’s asked Baba why he had given differing accounts of whether UFO’s were real or not, as the student had a keen interest in this subject. Baba looked at the young man and had just started to answer when a UFO suddenly appeared in the forest clearing behind his back; it just hovered in the sky in broad daylight. Without even turning to look behind him Sai Baba calmly said, “UFO’s are just imagination,” and the flying saucer immediately vanished.

In an article called ‘Making Contact’ the writer Paul Roberts describes how in 1969 he and two friends witnessed an enormous disc and seven or eight smaller discs that hovered over the sea in Cornwall for twenty minutes, before they merged together and flew upward at an estimated speed of 20,000 miles an hour. Two months later Roberts was again in Cornwall with another friend when the moonlit beach was vividly lit up by the sudden appearance of two luminous beings and a descending egg-shaped craft. Their next memory was of being inside this craft, where they were telepathically warned of the dire environmental consequences that could befall our planet in the future. They were outside the craft again before it soared into the sky. Then they sat together in silence on the beach for many hours before Paul’s friend remarked: “I guess this changes everything.”

Then in 1975 Paul Roberts was at Sai Baba’s ashram in India and happened to be discussing space travel with a nuclear physicist named S. K. Bhagavantam, when Sai Baba joined them and asked what they were talking about. When Roberts inquired about UFOs and life on other planets, Sai Baba told him to shut his eyes, then he felt Baba’s thumb press into his forehead. Afterwards Roberts wrote in his article:

“Instantly, an inner vision of awesome beauty opened up before me. I saw world after jeweled world in a limitless cosmos of coiling self-illuminated spheres within spheres. I was in each and every world simultaneously, their myriad unique fragrances, textures, sounds, and landscapes, all apparent, their every inhabitant me and yet also not me. As with a dream, everything was projected from me, and yet existed independently of me, flowing in and out as vital and as fragile as breath. Yet it was truly infinite, no limit possible to the teeming life, which seemed made of undiluted joy. A universe that continued literally forever, worlds without end.”

Sai Baba then said to them: “Outer space, inner space. Inner space the only real space.” Roberts then asked him if he was saying that UFOs came from within the mind, to which Baba replied: “Not mind. Heart. Heart is God’s mind, isn’t it? Space men come from the heart, the heart of God. Close your eyes, nose, mouth and ears. Is the world there? No smelling, tasting, touch, sight or hearing. Yes? World is gone. But you are not gone. See, my dears, all things are really made by you, but for now you are thinking that God is making the grandeur of this universe.”

On the theme of Sai Baba’s ability to manipulate time and space, I was once told a detailed story about how he had pushed a grieving Australian man through the wall of his interview room and straight back to his dying wife’s bed in Sydney. As fantastic as this tale sounds, I recently came across another similar story, which is one of four that the narrator had heard about Sai Baba teleporting someone to another country through the wall of his interview room.

A Hindu man who was present at an interview that Sai Baba gave for a poor Muslim family recounted this tale. A boy in this family was miserable because his two best friends had gone on pilgrimage to Mecca, but his parents couldn’t afford to send him, so as a consolation they had brought their son to see Sai Baba instead. Baba began the interview by saying to the boy, “So, you want to go to Mecca?” The boy burst into tears. Then Baba talked to the others for a while, but the boy kept on crying, so Baba turned to him again and said, “You really want to go to Mecca don’t you!” Baba then tapped the blank wall of the interview room with his hand: the wall disappeared, and in its place appeared a street scene from Saudi Arabia. “Look, there are your two friends, ” said Sai Baba: “Now go. You have half an hour.” The boy walked into the street scene, and the blank wall of the room reappeared.

Baba conversed with the boy’s stunned family for another half an hour, and then tapped the wall again. The street scene briefly reappeared as the boy stepped back into the interview room, proudly carrying some souvenirs from Mecca. A month later, when his two friends had returned from their pilgrimage, the boy’s parents asked if he really had been with them in Mecca, and for how long. Confirming the boy’s account, his friends replied, “Two weeks.” 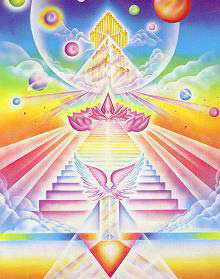